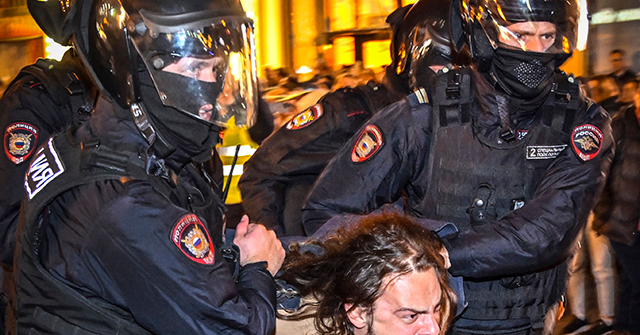 Russian leader Vladimir Putin’s declaration that he will double down in Ukraine by calling up 300,000 Russian reservists did not go over well with the 18-to-65-year-old men who might get called up.

One-way airline tickets out of Russia to visa-free destinations skyrocketed in price on Thursday and then sold out completely. Land traffic across Russia’s borders also picked up, although European news agencies disputed the most sensational claims of 20-mile traffic jams at Finnish checkpoints.

Reuters reported flights from Moscow to Turkey and Armenia, two major destinations Russian citizens can visit without applying for a visa, surged in price by up to 500 percent before selling out. Flights to Dubai were reportedly still available as of Thursday morning, but only at exorbitant prices.

“It was possible to buy a one-way ticket in the morning for 200,000 roubles to 300,000 roubles, but not anymore. That’s a panic demand from people, who are afraid that they won’t be…

Nearly 1,200 Arrested in Dozens of Russian Cities for Anti-War Protests